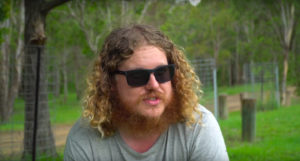 This year’s winner of our 2020 Ric Nattrass Research Grant is Colin Hird of the school of Biological Sciences, University of Queensland. Coen is conducting his Ph.D on investigating the threat of harmful UV radiation doses in native amphibians and their capacity for adaption to this stressor. While there has been laboratory-based research done on the effects of UV radiation on various life stages of amphibians; Coen is a bit of a trail blazer with this issue and he has designed and built ultraviolet radiation (UVR) data loggers to try and understand the effects of UV radiation in situ.

Incident ultraviolet radiation (UVR) from sunlight is a powerful natural stressor of amphibians, capable of causing both lethal and sublethal effects. Increased UVR as a result of anthropogenic activity has been correlated with amphibian declines worldwide, particularly at pristine high-altitude sites. While the negative effects of UVR on amphibian life stages are well established from laboratory-based studies, the ecological relevance of laboratory-based UVR exposures needs examining. In particular, no study has directly quantified biologically meaningful UVR doses that amphibians actually receive in nature. Furthermore, few studies attempt to understand potential UVR doses occurring within the diversity of amphibian habitats. This study will begin to fill this knowledge gap by directly quantifying UVR doses in situ along important environmental gradients.

Specifically, Coen aims to employ long term monitoring of UV-B and UV-A doses in amphibian habitats across East coast of Australia at high and low elevations and latitudes. The results will be used to determine if there is the potential for harmful UVR doses in the larvae of many native amphibian species. To do his Coen has designed and built UVR data loggers that will be deployed in the field along with short term UVR responsive dosimeter film, to measure environmental UVR doses in key amphibian habitats. Currently Coen is finalizing data logger construction and has conducted preliminary trials of the UVR-dosimeter film at Kroombit Tops and Mt Baw Baw with promising results. Ultimately, this research will provide critical insight toward actual UVR doses in amphibian habitats and the capacity for potentially harmful UVR does in amphibians. From Coen’s sampling efforts in the montane coastal areas this project will directly contribute to the conservation knowledge of Queensland frogs. Coen’s sampling efforts in the montane areas directly contribute to the conservation knowledge of Queensland frogs.

We look forward to hearing an update of Coen’s research at our AGM later this year.