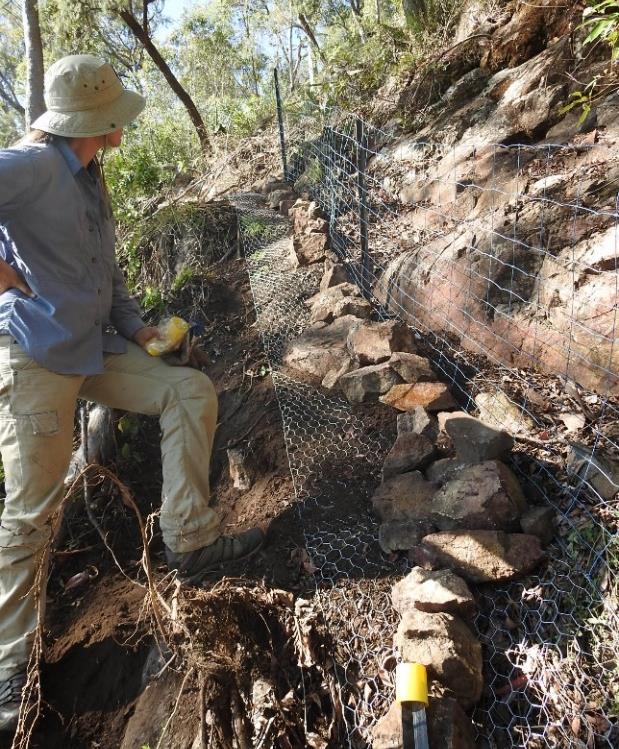 THE KROOMBIT TINKERFROG (Taudactylus pleione) is one of Australia’s most threatened frog species. Found only at Kroombit Tops National Park, south-west of Gladstone, this critically endangered species faces a number of threats to its survival, including predation and habitat disturbance by feral pigs (see ‘The problem with (feral) pigs’ in the Mid-Autumn 2021 issue of Frogsheet for more information).

In early September 2021, a team of QFS volunteers travelled to Kroombit Tops to install a pig-proof fence around an area of tinkerfrog breeding habitat heavily impacted by pigs. Working in difficult terrain, QFS volunteers successfully constructed a 170-metre-long wire fence, weighed down with rocks and boulders to prevent pigs from accessing this important area of tinkerfrog habitat. The fence was constructed over 4 days by a team of 5 hard-working volunteers under the direction of Harry Hines of Queensland Parks and Wildlife Service. The construction of this fence was made possible by funding from a Queensland Government Community Sustainability Action Grant awarded to QFS for actions supporting the recovery of threatened frog species at Kroombit Tops.